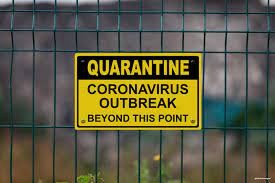 The appellant was charged for breaching the self-quarantine directions.  The appellant was convicted on his plea of guilty, sentenced with a term of imprisonment of 7 months with 2 months to be served immediately and 5 months suspended for 12 months.  He appeals such sentence alleging that there is miscarriage of justice.

The appellant was advised by the WA Police accordingly and was required to quarantine immediately.  13 days into the appellant's self-quarantine period, police officers attended the address in Ardross and the appellant was not present.  The appellant said in his interview with the police that he went to a friend's house earlier in the morning.   The appellant had been tested for COVID-19 on 9 January 2021, however, at the time of the offending, he did not know the results of the test.

On 3 March 2021 the appellant was convicted on his plea of guilty to one charge of failing to comply with self-quarantine directions.

The appellant was sentenced to a term of imprisonment of 7 months with 2 months to be served immediately and 5 months suspended for 12 months.  The appellant applied for leave to appeal against the sentence imposed on him.

I. Whether or not the sentence was manifestly excessive.

II. Whether or not the magistrate erred in law.

Sentencing Act 1995 (WA), ss 9AA, 62, 67 - provides that the magistrate should specifically identify the fact of the discount for the plea of guilty and further.

Criminal Appeals Act 2004 (WA), s 14 - provides that the appeal should be dismissed if the magistrate's error did not give rise to a substantial miscarriage of justice.

The respondent accepted that the magistrate erred in failing to inform the appellant of the seriousness of the charge and the penalties which may be imposed including the risk of being sentenced to a term of imprisonment.

The magistrate failed to draw to the attention of the unrepresented appellant that he was considering imposing a period of imprisonment.  Having regard to the two character references speaking highly of the appellant, personal deterrence is less significant and a more lenient sentence than that imposed is appropriate.

The Court ordered the leave to appeal granted in respect of ground 3 of the amended appeal notice.  The appeal was allowed while the sentence imposed by the magistrate on 3 March 2021 be set aside.  The appellant is sentenced to a Community Based Order for a period of six months, with a community service requirement of 60 hours and a spent conviction order be made in respect of the conviction entered on 3 March 2021.