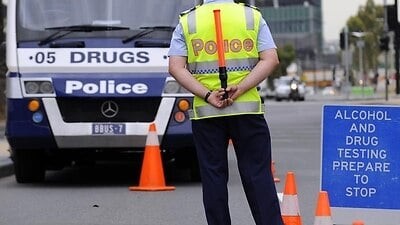 The accused drove under the influence of drugs but the specific drug was not named in his charges; the omission was held as valid by the Magistrate and charges were amended to include the name of the drug and omit ‘or in charge of’

The accused, travelling north on Northern Highway, Kilmore, was intercepted by Leading Senior Constable Pezzimenti, upon which the former produced a Victorian driver license in the name of Allan Nunn. Pezzimenti then conducted a preliminary breath test which showed Nunn was not under the influence of alcohol. Nunn was then informed by Pezzimenti that he needed to undertake a preliminary oral fluid test. Failing to provide a sufficient sample of oral fluid, they went to the Kilmore Hospital to have Nunn provide a blood sample. The blood sample was sent to the Victorian Institute of Forensic Medicine for analysis which confirmed the presence of methylamphetamine, a prescribed illicit drug for the purpose of Section 55E of the Road Safety Act 1986. Two charges were filed but neither of the charges named the drug. In the Magistrates’ Court hearing, both charges were held as valid subject to an amendment including the name of the drug (methylamphetamine) and deleting the words ‘or in charge of’ to avoid duplicity of charge.

The Criminal Procedure Act 2009 - provides that charge-sheets should contain particulars necessary to give reasonable information as to the nature of the charge.

The Road Safety Act 1986 ss 49(1)(bb) and 49(1)(i) - if a charge is to contain reasonable information,  ‘the essential factual elements of the offence, in addition to its legal nature, must be identified in the charge.’

Criminal Procedure Act 2006 s 8(4) - the power to amend when the limitation period has expired is contingent upon it not commencing a proceeding for a new offence.

Pursuant to the Criminal Procedure Act 2009, the defendant’s claim anchored on Baiada Poultry Pty Ltd v. Glenister (2015) 257 IR 204; [2015] VSCA 344 is untenable. The plaintiff correctly argued that there is spectacular omission because the presence of the drugs in the plaintiff’s system is central to the offence charged upon him. It is self-evident that the alleged drug should be named in the original charges. The charges are capable of amendment because the inclusion of the name of the alleged drug as well as the deletion of the words ‘or in charge of’ did not alter the nature of the offences.

The Magistrates’ decision that the original charges are valid is ordered  to be quashed. As to the other orders sought by the plaintiff, the court declines to make further actions as the amendments of the charges to include the name of the drug are valid.